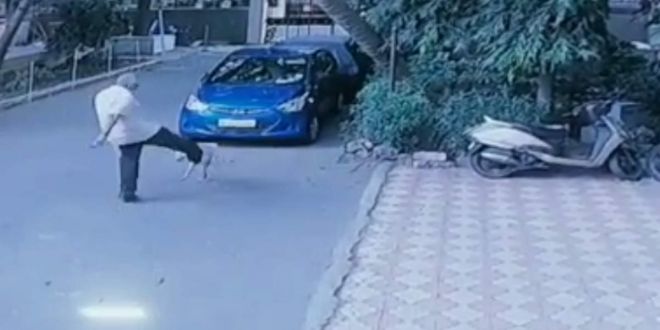 Violence against Animals, Feeders during Lockdown

Despite the ongoing national lockdown, a baffling rage has been witnessed against animals and their feeders. Two instances of unprovoked extreme animal cruelty and assault on an animal feeder were reported from Mira Road and Malad (East) areas, leading to police complaints against the accused persons.

At Mira Road’s Nityanand Nagar complex on Thursday (April 23), a resident of Amantran building reportedly kicked a docile seven-year-old female dog so hard that the poor animal was lobbed up in the air due to the high impact. The dog was later found dead the same day. Shocked animal lovers have lodged an FIR at Kashimira police station against one Kailash Singh under IPC section 429 and section 11 of the Prevention of Cruelty to Animals Act, 1960.

A CCTV video footage showing the accused man (Singh) kicking the dog at Nityanand Nagar complex has also been recovered by the local animal lovers as incriminating proof. “We used to regularly feed this affable dog. Many cried after seeing the horrific CCTV footage. The police officials were very helpful in taking down our complaints. We want justice for this dog,” said a local animal lover, Peter Pattath.

Meanwhile, at Upper Govind Nagar in Malad (East), a 58-year-old animal feeder, Anandilal Chanda, was physically assaulted by a local resident, Mohan Harde, on Sunday as the accused was angered to see the dogs being given food near his residence. “My husband (Chanda) has received injuries on his back and hand due to this assault. The doctor has advised bed-rest to him. I went to Dindoshi police station where a non-cognizable (NC) was registered in this regard. Despite the registered in this regard. Despite the enforced lockdown, over 20 supporters of the accused man (Harde) landed at the police station talking loudly and angrily at me. It is hard to comprehend how can anyone beat up a person who is only showing kindness towards animals,” said animal activist Madhu Chanda. She has also intimated the veteran animal activist and former Union minister, Maneka Gandhi about this assault on her husband.