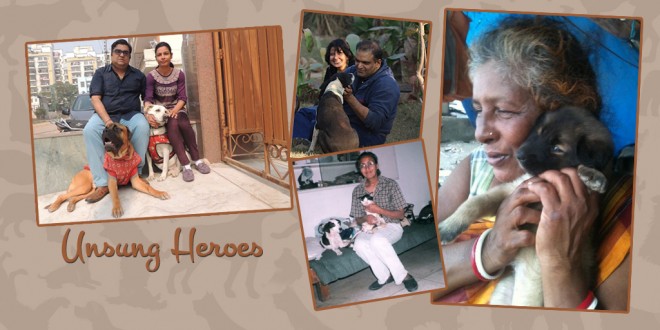 These words by Leonardo da Vinci may have fallen on a lot of deaf ears in India but not to the ones of those we are going to tell you about in this very story.

We all have heard of ‘Superman’, ‘Batman’, ‘Spiderman’ – the man-made saviors of humanity who are much celebrated and idealized. But, what will you call these real-life unsung heroes who have selflessly dedicated their lives to saving and nurturing animals in India? We suggest, let’s not typecast them. For their work and humanity are the best introduction they could or should ever have. While there are several renowned organizations working for the welfare of animals, these citizens are one-man (or one-woman) armies who have stood by their cause and have helped countless animals survive. Meet the ‘Dog’fathers and ‘Dog’mothers of India!

Is being financially challenged what it takes to be human to dogs? Pratima Devi is a rag-picker and lives in a parking lot of an area considered as one of the swankiest in South Delhi, Saket. You cannot ignore her for a simple reason that she isn’t just a normal morning to evening rag-picker who is seen on roads picking the left-over joys, sorrows thrown by you and me. She is also a messiah of dogs who are living a blessed life.

Devi has been single-handedly feeding over 70 dogs since almost 30 years now and was awarded with the Godfrey Philips Bravery Award in the year 2009 for her ‘social bravery’. She refuses to stay with her own children and rather calls these innocent animals her own kids.

Devi has not even seen her village for over seven years now as she continues to feed, protect and take care of her adopted strays. With her dedication and relentless efforts to serve the voiceless, Pratima Devi has proven that it isn’t that difficult to be what we are by birth – humans.

An MBA, an artist and a website developer. She is Dorothy Ghosh. Everything was perfect in her life – a job to die for, a neat pay package and a comfortable routine. If something is to be blamed to spoil all of that, it has to be her passion to rescue dogs and cats. Well, not really. She might have lost a so-called convenient set-up of her life but only to gain a lot of love, respect and admiration.

It was her compassion for animals that pushed her to start a shelter for them and Kalyani Animal Welfare Foundation (NGO) came into being in 2010. But it wasn’t as easy for her as it sounds. Ghosh had no option but to spend all her savings to collect funds and thereon, take a land on 5-year lease in Village Bhati in Delhi. Apart from a few private donors, she gets no aid from the government and her mother donates her entire pension to bear the rent. From collecting funds to buying medicine to cleaning the premises, both mother and daughter manage every single bit at the shelter all by themselves.

Just like Ghosh, there’s another gutsy lady who chose not to tie the nuptial knot and instead dedicate her life to the furry friends. Nita Seth, who lives in Defence Colony, is in her 60s and is caretaker for over 40 dogs and cats and all of them reside alongside her. She has been in this noble service for over 20 years now. Seth and her adopted children survive on donations as she has no other source of income. Call them the ‘one-woman’ army!

Yes, they are lovey-dovey and yes, they are affectionate. But more than for each other, it is for the abandoned and the abused. And it’s their door mat that reads ‘welcome’ for the voiceless souls who don’t have homes anymore. That’s right. AjayDeep Singh and Samita Sharma are not just married to each other but also to their heartfelt cause of saving dogs and giving them a new life. And they are upholding their passion from their residence in Faridabad.

The couple has been turning savior for pedigrees and dogs who are lost or, at times, run away from home. They treat them, get the fear out of their minds, make them fit for adoption and get them re-adopted. And since the times they decided to take up this noble duty, the two haven’t been on a vacation. AjayDeep is a well-read professional, an IT Consultant and despite his daily chores, he manages to give time to the adopted kids. Often discouraged by neighbours and people who don’t feel for animals, the man and wife on a mission have never let it become a hurdle in their way of goodness.

Not very different is the story of Nadir Khan and his wife Pia Sethi, who feed almost 1,800 dogs in Sector 56, 57 of Sushant Lok, Gurgaon. Apart from dogs, they also attend to other stray animals such as cattle and injured birds. Their routine has both travelling to various spots where dogs often wait for them to get fed. All the dogs at these places are vaccinated against rabies and are sterilized by them. Their noble cause has been inspiring enough for other NGOs in the area to supply them with free medical aid as the couple usually ends up spending most of their earnings on their selfless deed. They too, like AjayDeep and Samita, have given shelter to few of the dogs at their home. It is indeed a ‘Home Sweet Home’ for a lot of lives breathing in the National Capital Region, thanks to the kind-hearted couples.

The pledge, cause, kindness, passion to protect, make lives thrive… one often thinks, what could be the reason for their relentless efforts? And the answer echoes loud and clear. For every cruel action, there’s goodness waiting to nullify it. Despite several Indian laws in place for protecting animals, many Indians still disregard the idea of their peaceful existence alongside the concrete society. Time and again notices are issued; circulars are distributed to remind mankind of their duty towards the voiceless. Recently, the Animal Welfare Board of India also released a notice that said, “Street dogs cannot be beaten and driven away from localities, it is their right to live in the same place where they have taken birth.” There is also no law that prohibits feeding of street animals. In fact, citizens who go out of their way to feed the strays are performing a compassionate duty under the Constitution of India.

The Prevention of Cruelty to Animals Act, 1960 has also been long in existence but does a majority of India really abide by it is still a big question mark. Nevertheless, these selfless, unperturbed souls with noble intentions sure look determined to change quite a few mindsets, and they are the reason why India is indeed a better place.

This inspiring story was covered by Preeti Hoon:

From blogging to reporting to breaking stories and being on national as well as international television – she has done it all. Spreading her wings, this Jill of a lot of trades now indulges into pure joy of Zumba, soul writing, LIVE anchoring and is paid handsomely for it!

The original article was posted here