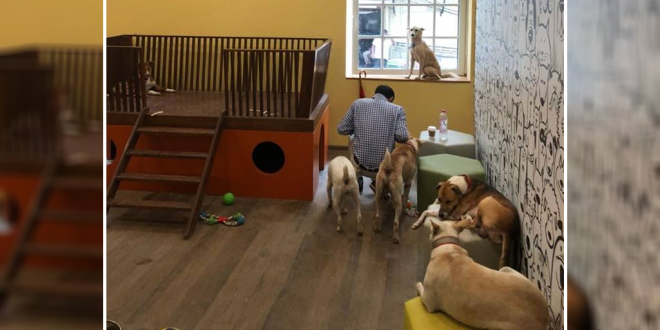 They have created a special kennel for the strays dogs. These breed of Indian stray dogs have been an integral part of the building and its history for decades.  This place is well known, how strays have always been let inside the building premises. And now they have their own room!

An animal NGO based out of Mumbai shared an adorable picture of the newly furnished ‘dog-room’ on its Facebook page, Save our Strays.

This is the dog room at the newly renovated Bombay House (belonging to the Tata Group). This is the room where the…

The picture shows a bright palette of colorful walls – a bright yellow wall and its adjacent wall steals the show. It is a doodle-wall, with human’s best friend’s doodles all over it!

“This is the room where the street dogs living around the area can have a meal, drink water, take shelter from the sun or rain or just chill out,” the post said.

“Quite a few Indians may be on the list of the richest men in the world but few have the class and the humanity of Mr Tata’’, wrote one delighted user. I hoped this gesture would inspire others to do more for our furry friends.

Ratan Tata’s fondness for dogs has been well documented and it is widely believed that it was he who ordered that the strays be let inside to take shelter. When the senior brass of the Tata Group had moved out of its iconic address to a temporary office close to the original location, the four-legged residents of the building had followed them.