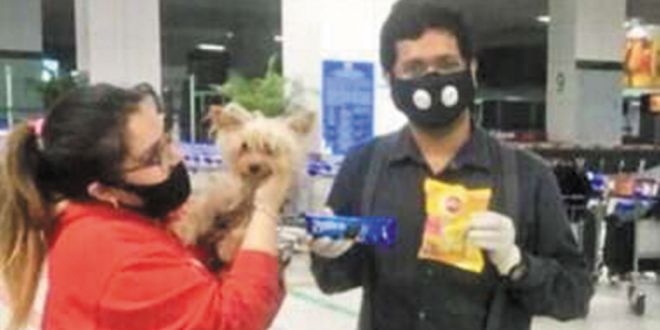 The coronavirus spread has created panic across nations. People are stranded in many parts, and so are the puppies. This is why the Indian government introduced Vande Bharat Mission, the massive repatriation operation planned to bring back stranded Indians in different parts of the world in the wake of the coronavirus crisis. Among them was an adorable pup, a one-year-old Yorkshire Terrier, who was stranded in Uzbekistan. With the government’s initiative Vandhe Bharat Mission, the dog returned and was reunited with the owner. The puppy named, Oreo, is visibly excited to be able to meet with the owner, and the little one was also treated with oreo biscuits and snacks, on behalf of New Delhi District Administration. The official Twitter account of the administration had posted a picture of the adorable pup, happily united with the owner and delighted with the treats.

The District Election Officer, New Delhi captioned the photo, “Welcomed the youngest passenger from #Uzbekistan under #VandeBharatMission. Oreo, a year-old #YorkshireTerrier, excited to be home was greeted & treated by @piyush_rohankar on behalf of New Delhi District Administration.” But this tweet was deleted after it faced a backlash from some users on the disparity of treatment, in light of the condition of the migrant workers in the country.

Even on this tweet, there were reactions about how dogs are getting a better treatment compared to the migrant workers. Meanwhile, those in distress are returning from places where they were stranded, with the help of Vande Bharat Mission. Under this initiative, people will be brought back on commercial aircraft and naval ships based on lists prepared by India’s embassies. In total, the authorities will bring back Indians from the UAE, the US, the UK, Saudi Arabia, Singapore, Qatar, Malaysia, Bangladesh, the Philippines, Oman, the Maldives, Dubai, and Bahrain. The mission expanded the scope of deportation to Russia, Germany, Thailand, France, Spain, Uzbekistan, and Kazakhstan.