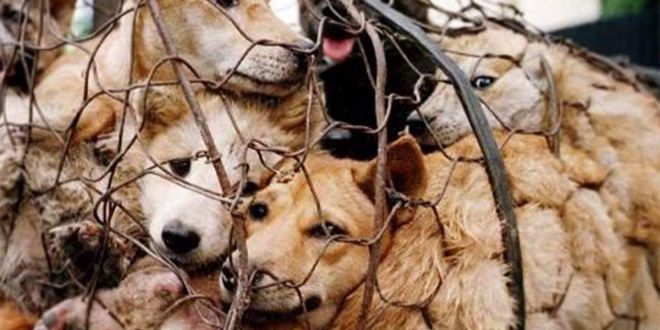 Humane Society International told that Mizoram has taken the first step towards ending its dog meat trade. They are amending a new law to remove dogs from the definition of animals suitable for slaughter.

In a statement, the organization stated that the consumption of dogs is prohibited under India’s food safety regulations. However, each year the thousands of dogs are illegally captured from the streets or stolen from their homes and they stuffed into gunny bags with their mouth stitched or tied and transported over to Mizoram districts such as Aizawl. There have been reports of dogs transported from neighboring countries such as Myanmar and Bangladesh too. The cruel transport and slaughter of dogs violate several provisions of the Prevention of Cruelty to Animals Act, 1960, the Indian Penal Code, and Food Safety and Standard Authority (FSSAI) regulations.

The statement is added by HSI/India, that a former member of the State Animal Welfare Board of Mizoram, has been working to end the dog meat trade since 2016, including the rescue of more than 150 dogs from the brutal trade.

AlokparnaSengupta, managing director, HSI/India said, “This is a very welcome and much-needed move by the Legislative Assembly to remove dogs from the definition of animals for slaughter. We hope that this law will now ensure an end to dog slaughter in Mizoram, but in order to shut down the trade completely, we urge the Government of Mizoram to take action to ban the sale and consumption of dog meat too.

This comes at a time when the world is facing a pandemic believed to have been caused by the trade in wild animals for consumption. In Mizoram we have witnessed dogs and other animals being transported and slaughtered in horrific conditions, violating India’s health regulations. So in addition to raising awareness about the illegality of slaughtering dogs for meat, we urge the government to proactively promote the human health benefits of moving towards a more plant-based diet, and reducing and replacing the consumption of all animals.”

Around 30 million dogs and 10 million cats are killed every year across Asia for human consumption, with the trade most widespread in China, South Korea, Indonesia, Cambodia, Laos, Viet Nam and parts of northeast India. However, Hong Kong, the Philippines, Taiwan, Thailand, and Singapore have dog meat bans in place.

To get more news about dogs, visit the largest dog website in India!