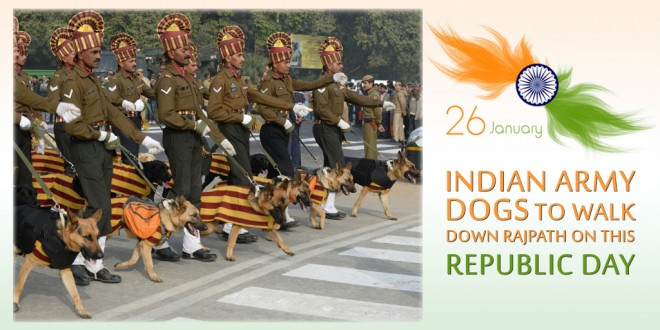 Indian Army Dogs To Walk Down Rajpath On This Republic Day

An incredible moment for all of us. After 26 years, Indian Army dogs will be walking down Rajpath on this Republic day!

Here is the story covered by Times Of India:

Indian Army dogs, who have saved the lives of numerous soldiers in counter-terrorism and counter-insurgency operations, will march down the Rajpath for Republic Day Parade on January 26 after a gap of 26 years.

The Army, which has about 1,200 Labradors and German Shepherds, have selected 36 canines to march down the Rajpath with their handlers.

Mansi, a four-year-old Labrador, and her Kashmiri master Bashir Ahmed War from the Territorial Army (TA) had made the country proud when they made the supreme sacrifice while gallantly fighting a group of heavily-armed infiltrators in the high altitude area along the Line of Control (LoC) in Tangdhar sector in August last year.

A war dog training school was raised on March 1, 1960 at Meerut. Basic and advance training to dogs and their trainers on specialized jobs like explosive detection, mine detection, tracking, guarding and assaulting is imparted at the Remount and Veterinary Corps (RVC) Centre and College.

The motto of the Corps is ‘Pashu Seva Asmakam Dharm.’

The Army had come under severe criticism from the common people and dog lovers across the world after it was revealed in an RTI reply last year that dogs, horses and mules are put to sleep after their retirement. Following a PIL, the government had in September informed the Delhi High Court that it would come out with a policy on the issue within six months. Though a final policy is yet to be adopted, the Army has stopped further killing of aging animals, except for those suffering incurable, terminal diseases and injuries.

The development came at a time when many countries, including the US and France, have special rehabilitation schemes for military dogs. The gallantry medal was awarded to a police dog killed after the Paris attacks last year.

The Indian Army dogs are trained in sniffing bombs, hunting down enemies, locating secret places and fetching evidence. The Army generally uses Labradors, German Shepherds and Belgian Shepherds, depending on the altitude and weather, besides the nature of assignment which may include routine patrol to explosives detection.

You can read the original post at Times Of India