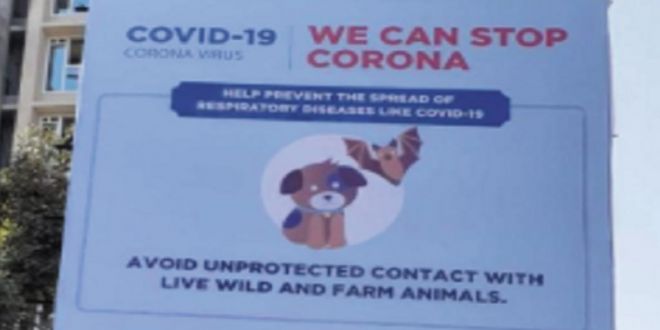 Within days of the COVID-19 outbreak, hundreds of pets in Mumbai became strays. People started abandoning their loved dogs and cats on the streets when nobody was watching. Why? Because of the World Health Organisation, WHO, the international agency which is spearheading the fight against the pandemic put out on its India website warnings like Keep Away From Pets and Keep Away From Wild and Farm Animals. Promptly, around 17 civic bodies in Mumbai started making announcements and putting up hoarding and pamphlets, with images of dogs, cats, chicken, and bats. There were around 167 hoardings at railway stations, buses, vans, taxis and government offices across Mumbai.

Anand Siva, animal activist, environmentalist and former co-opted member to the Animal Welfare Board of India says: “This was ridiculous, wrong and very irresponsible of WHO especially since just a few days before this they had categorically put out a message that there was no reason to believe pets could be carriers. I spent a few hours frantically calling their Delhi numbers, sending emails to their global media relations and communications team. Alongside, I reached out to vets across the country and unanimously they all confirmed there was absolutely no truth in that. Sadly, WHO failed to respond or act, and didn’t pull down the message.”

Why did WHO put out the hoardings warning against pets when there has been no case anywhere in the world of domesticated animals contracting or spreading the COVID-19 infection? Was it the organization’s India branch that was responsible for spreading such panic among pet owners, as no such notice was there on the WHO international site? Outlook has sent out a detailed questionnaire to the WHO and is awaiting its response.

Maharashtra health minister Rajesh Tope came out and allayed fears about pets spreading the disease. But the damage had already been done. Says Leena Tandon, writer, director, and co-founder of House of Paws: “In Mumbai, we already have a count of more than 100 pets abandoned due to the fear of getting infected by them. Everyone is trying to do whatever one can in the limited capacity but with all the shelters already flooded with cases and so many paid/free fosters also occupied where does one take them.”

Vijay Kishore Mohani, founder of the Bombay Animal Rights Association (BAR) says, “We have data of approximately 130 plus abandoned pet animals though the real figure would be much larger than one can imagine. Out of which, 40 percent are expensive to breed dogs.” Adds Deepa Talib of The Anubis -Tiger Foundation, “We are scrambling to rescue and safeguard as many as they can before they fall prey to accidents, maggot wounds, disease, and a grizzly sad death. All because their owners didn’t care about their well-being.”

Laila, a golden retriever was rescued along with a Rottweiler from a politician’s bungalow, both left to die, tied in the scorching heat outside to the main gate of his house, with no water, no food, cigarette bud marks all over her body. Both the dog were adopted by a family. The silver lining is how so many families came forward to give shelter to the abandoned pets even in these trying times of lockdown and limited supplies.