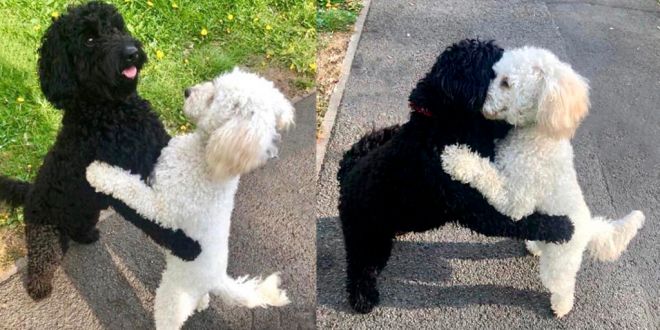 Dogs are the most adorable beings and if you don’t believe us, just take a look at the viral dog videos and pictures that rule the internet. One such image that is going viral on the internet is the cutest thing you will see today.

The viral pictures were shared by Twitter user Libby. She posted screenshots of her conversation with her dad. He told her about an incident that occurred with their family dog and another puppy.

According to her dad, it turned out that the two were brother and sister from the same litter. He added, but instead of just playing as they do with other dogs, the two hugged each other. Yes, you read that right.

pls look at what my dad sent me this morning I cannot even😭❣️🐶 pic.twitter.com/QTy5J8uEwZ

Soon after the post was shared, it quickly went viral and garnered over 116.5k retweets and 582.6k likes.

Twitter users also took to the comments section to talk about the adorable moment the dogs shared. Few also posted pictures of their pets hugging their siblings. Take a look at what netizens are saying:

I didn’t have to cry this hard ❤️

This is the Karan Arjun remake we’re all waiting for

Max and his friend Casper 🥺 pic.twitter.com/gynoMRwpam

We have two dogs in the family who share a mum but are from different litters. They’re a year apart in age but are inseparable 🥺 pic.twitter.com/J8RUCoLo8i

Okay, I’m shook. I literally have the doppelganger of that dog pic.twitter.com/ks0bolaVar

My boy Bailey loved meeting his wee pal in the park❤️🐾 pic.twitter.com/QJYaNsq3N6

These look like baby versions of my girls 😍😍😍😍😍😍 pic.twitter.com/mYVcQYwpPS

Our little one is the same when he sees his litter siblings, it’s so sweet! ❤️❤️❤️ thought you might like the pic without the leads! X pic.twitter.com/MayHYGduXa