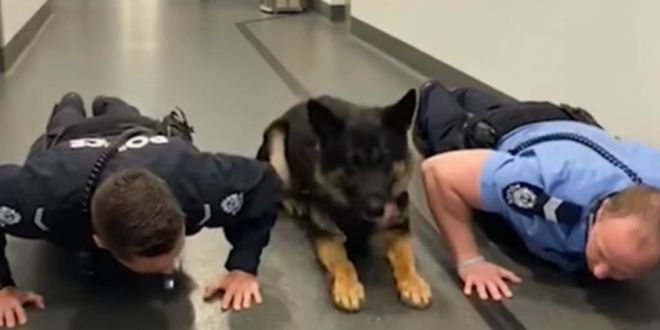 Dogs are a man’s best friend and several videos on the internet are a testament to this fact. Recently, a video of a dog was shared on Facebook by the Western Australia Police Force and it is the most adorable thing that you will see today.

The video showed a police dog taking part in a push-up challenge alongside his fellow officers at the Kalgoorlie Police Department. The dog and his humans took the challenge as part of Mental Health Awareness Month.

The video was shared on the social media site with the caption, “100 percent certified good boy PD Whiskey does the #pushupchallenge for Mental Health Awareness Month!”

The dog took part in the challenge to create awareness during the Mental Health Awareness Month through this physical activity.

The footage shared on the Facebook page of the police department shows Whiskey carefully listening to the officer’s instructions as it takes part in completing the push-ups with them. Whiskey first gets in the sitting position and when the officers go down, it also lies down on the floor.

After the video was shared online, it quickly went viral and was viewed over 129k times by netizens. Many users took to the comments section to praise Whiskey. One wrote, “I’m amazed by dogs and how they help with police work. Well done PD Whiskey for helping the mental health officers.”

Here’s what other users commented: